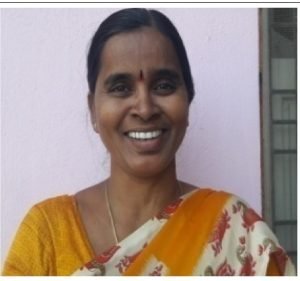 Nagamani is a frail-looking woman with a calm composure, who works feverishly at the Mother Teresa Rural Development Society’s office. Previously uneducated, she received computer training from the organization, and has been given the responsibilities of depositing and dispencing funds. She does it with such finesse that one gets the impression that her educational background is far greater than it actually is. She adamantly declares that whatever she is today, it is because of the organization’s help and belief in her.

She is also a member of a self-help group, and has educated her children through loans, as well as acquiring loans for investment in farming and other emergencies.

She lives a contented life and derives pleasure and satisfaction in the knowledge that she helps the village women to deposit the money in the centre, which results in their personal development.