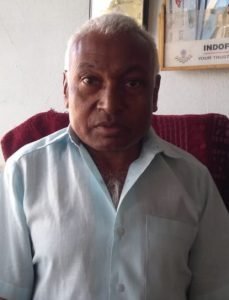 Sixty-four year-old Mr. Shown Reddy shares his life’s journey with YFRDS. He was working with the Society, initially, for Rs.500 – a job given to him by Fr. Julian. He had only studied as far as 5th std., due to health issues, and primarily lived his life indoors. By working hard at the Society, he has risen to the position of Accountant and Manager.

He says that life was very difficult for him, as he wasn’t able to feed himself. However, he could manage with the Rs.500, paid to him as a a salary for his work for MTRDS. He had some farm land but wan’t able to make a living from it. Thanks to the YFRDS, he able to buy seeds, made possible by loans from the Society, and has since cultivated his farm successfully.

He had been one of the four farmers who had gone to Germany with Fr. Julian, by invitation from the German Farming Society, where he studied their farming practices. Upon his return to India, he went on to serve the YFRDS society in different positions. Today, he is instrumental in guiding young people and encouraging them to lead from the front.

He says he was struggling to earn a mere Rs.100, and had not had much to eat during those lean days, but today he is so successful now that he can lend any farmer lakhs of ruppees in case of need. He recounts that he was always looking for help when he was growing crops before the onset of YFRDS. He has utilized the benefits of YFRDS for sowing seeds, and obtaining fertilizers and pesticides, and is most grateful to YFRDS, and to Fr. Julian, who transformed his village into a veritable success story.